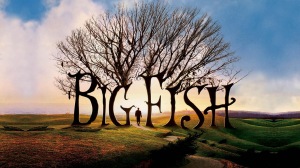 Made in 2003, Big Fish is one of the smaller films from famous (and infamous) director Tim Burton. Based on a novel by the same name, the book made the jump to the silver screen with all the grace of a large trout swimming upriver. It is the story of two men’s lives and the women who love them. It is a story about memory and its effect on the way we view life every day. It allows us to question the importance of ideas like “truth” and invites us to examine, above all else, the powers that stories have over us all. From book, to screenplay, to feature-length film, Big Fish has gone through as many transformations as its main characters. But with a story like this, a story that is, in fact, about stories, the form, narrative elements, and mise-en-scene of each version contributes greatly to the way the work is received by audiences. Each brings its own strengths to the reader and the viewer, but all work together to bring a message to the audience about the power of stories and the way they can change our lives for the better. 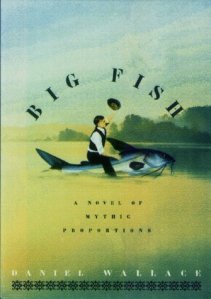 The Big Fish screenplay is an admirable example of how, when it comes to stories, form can be as important as function. Written by John August, based on the book by Daniel Wallace, the screenplay often follows more literary motifs then cinematic ones. For example, the screenplay includes an epigraph and an epilogue, elements very rare in film. This epigraph is never communicated in the film, but it’s inclusion in the screenplay is suggestive of a prosaic purpose. When epigraphs are included, they are usually used to support various plot elements an author is planning on developing in the work. Epigraphs are also used to suggest a theme and set the tone of a work. When the phrase “This is a Southern story, full of lies and fabrications, but truer for their inclusion” is coupled with the film’s final scene, or epilogue, in which Will does a voice over saying “That was my father’s final joke I guess. A man tells his stories so many times that he becomes the stories. They live on after him. And in that way, he becomes immortal”, it does just what an epigraph ought to do. Through this device an implicit meaning for the entire film becomes clear. The meaning is that stories, whether true, false, or somewhere in between, define our lives, define us as people, and help messages live for lifetimes. Not only does this device speak to a major theme of the film, it also provides clear lines along which the theme develops and also lends a sense of unity to the work, framing the tale at the beginning and the end.

While the screenplay is a beautiful piece of work, like screenplays everywhere it comes across as rather dead without the magic of the movies to bring it to life. Furthermore, narrative elements do not always translate well into cinematic ones. In the transformation from screenplay to cinema, things are bound to change. Take, for instance, several cases of cause and effect, mainly those surrounding the more human elements of the story. One of the most obvious differences is the relationship between Will and his mother. One can see this clearly in Scene 67, in which Will and his mother, Sandra, are in the grocery store, discussing his father. This is a rather confrontational scene, in which Sandra challenges her son on whether he knows anything “true” about any of the people he loves, including her. This scene never made it into the final film and with good reason. In the movie, Will and his mother only ever get along, at least when the audience is privy to their interactions. She rarely speaks and when she does it is with a genteel sensibility, always looking to stay positive, even when it seems impossible. This helps focus the narrative on the conflict between Will and Edward, while also continuing to paint Sandra as a more typical fairy tale heroine: quiet, beautiful, and charming.

If you enjoyed this post, you may be interest in these other pieces: