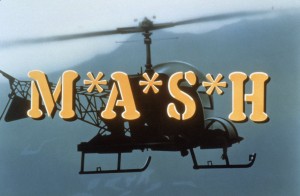 I’ve always enjoyed watching older television shows. The channel TV Land was a favorite with my sister and me, and we could sit for hours watching Barney Miller, Cheers, The Munsters, and many other series from before our time. But one show which I only watched in passing as a child has become much more important to me now that I am older; the long-running series M*A*S*H.

M*A*S*H, which stands for Mobile Army Surgical Hospital, ran from 1972 to 1983, for a total of 11 seasons and over 250 episodes. Based on the 1970 film of the same name, the television series starred Alan Alda as Dr. Benjamin Franklin ‘Hawkeye’ Pierce, Loretta Swit as Major Margaret “Hot Lips” Houlihan, Gary Burghoffas Corporal Walter Eugene ‘Radar’ O’Reilly, and a rotating cast of characters which included Harry Morgan as Colonel Sherman T. Potter, Larry Linville as Dr. Frank Burns, Wayne Rogers as Dr. John ‘Trapper’ McIntyre, Mike Farrell as Dr. BJ Hunnicutt, and David Ogden Stiers as Dr. Charles Winchester, III. Set in Korea during the 1950 war, M*A*S*H follows the ups and downs of life at the M*A*S*H 4077, where they patch up the men and boys who are fighting on the front lines of a war with murky purpose and no end in sight.

I had seen a few episodes of M*A*S*H during those TV Land binges I mentioned, but I didn’t begin watching the show in earnest until five or so years ago, when I began dating my current boyfriend. He was, and is, an avid fan of the show, having watched it with his parents when he was growing up, and he was determined to expose me to as much of it as possible. I have no hesitation in saying that M*A*S*H is probably one of the best acted and best written shows of its time – or ever. It delves deeply into the lives of people fighting a war that most of the country has forgotten, or tried to forget, in ways that are funny, tragic and touching. Issues such as shell shock, homosexuality, and civilian casualties are covered with sensitivity and honesty.

The Korean War was fought officially from 1950 to 1953. A draft was put in place in the United States, and the show M*A*S*H reflects this. There are characters who have made their whole careers in the military, characters happy to serve their country, reluctant draftees, and those who would do just about anything to get out and head back home. The characters in M*A*S*H are from diverse backgrounds, different parts of the country, different nationalities, different economic classes, but they are all in the war together and must make the best out of a bad situation.

From the career military woman Margaret Hooligan to the farm boy draftee Radar O’Reilly, no one escapes Korea unchanged; though these changes are not always negative. Margaret develops from a goody-two shoes woman obsessed with finding a good man to a nuanced, complex character who can stand on her own two feet, regardless of who is around her. Radar learns to have confidence in himself, very literally grows up from a boy into a man, and, even though he is happy to return home to his family when his time is up, takes what he has learned in the 4077 home to help run his family’s farm. On the other hand, Hawkeye suffers great mental strain during the course of the show, becoming increasingly hopeless about the state of the world and the place of humanity in it. BJ, a cheery, optimistic man from California (check), becomes coarse very quickly as a way to cope with the environment into which he has been thrust. M*A*S*H is and was a wonderful show on so many levels, but if it was one point it made particularly well, it was that no one who faces war, or who is touched by war however remotely, can remain unchanged by it, for better or for worse.