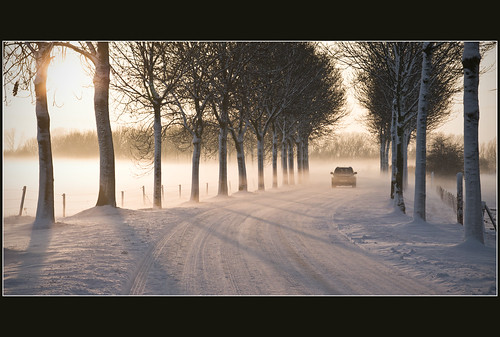 We were driving down to Oregon a week before Christmas, each contemplating what the move would mean for us, when the radio died. We hadn’t been listening to the radio; we’d brought a book full of CDs to while away the hours, and we hadn’t really been listening to those either – but with the stereo console dead, we were left in silence. Almost silence; after a few moments the dull roar of rubber rolling along asphalt became clear, like the sound of the ocean when you put a shell to your ear.

The job offer had happened suddenly. After over two years of dutifully filling out an application every week, I had been contacted, interviewed, and offered the position in a small Oregon town in under three weeks. The official job offer sat in a folder in my luggage in the back seat, temporarily out of reach. It needed to be back in the hands of my future boss as soon as possible, hence the last-minute road trip to see the town.

The trip wasn’t for me, not really. It was for him, the man driving the car, the man whose engagement ring sat on my finger, who I’d known for eight years, dated for seven, slept beside for one and been betrothed to for seven months. In those seven months my life had changed more drastically than it had in the whole proceeding eight. My father passed away; a heart attack, sudden, like the job offer, and unexpected, like my fiancé’s reaction to that job offer. Between the two events, one devastating, one bittersweet, I had to admit to a certain uncertainty as to the status of our relationship.

My fiancé fiddled with the radio for several minutes, eyes flickering between it and the long stretch of empty road. But it was no good; I had learned sixth months ago that once things died they don’t ever come back. We sat in silence, looking out the rental car’s cleaner smeared windows as the miles rolled by.

He had lived in our hometown all his life. Twenty-five years of memories and experiences jammed into fifty or so square miles. I didn’t understand it, having moved for the first time when I was seven. Academically, the idea of a ‘home’ that was location-based made sense, but emotionally I just couldn’t empathize with his distress at the thought of leaving it.

He didn’t have to come. I’d told him that myself. We weren’t legally bound to one another, would only be out about five hundred dollars for the wedding venue reservation, and everything was still easily reversible. He just shook his head. The sight of tears on his cheeks made my stomach ache.

“I don’t really have a choice, you know.”

The sound of his voice, so familiar to me, startled me after the silence of the past week. I turned to watch the firm line of his mouth as he gripped and re-gripped the steering wheel with his calloused hands.

“I love you. And you’re going to take this job. So I have to come.”

“No. You don’t.” I blinked at him, my heart stuttering in my chest, like tires running over safety turtles on the side of the road. “Everything’s a choice. I know you love me, but you could choose to stay.”

My mouth opened, but a heavy sigh forced its way past the unspoken words on my tongue. I started to turn back to the window, but for the first time in almost a week, I couldn’t stop the words from spilling out.

We talked and talked and argued and cried and protested and talked the whole eight-hour drive. By the time we pulled into the small motel in the small town where my new job lay, we were exhausted and sore throated, but we both finally knew that we we’d get through this together; it was just a matter of time.