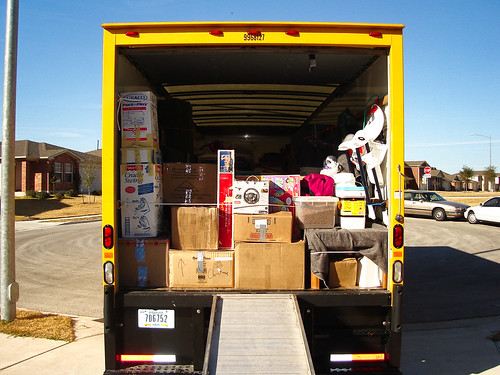 Moving is hard for writers. I think it’s hard for everyone, of course, but being a writer and moving presents a unique set of problems that I’m not sure everyone else experiences, or at least experiences to the same extent.

For example, for one who is keenly aware of the pattern of stories, it’s hard to view the impending move as anything but the rising action of plot. A writer examines the move for potential character building conflict, for the introduction of new characters, looking behind them and analyzing where the ‘beginning’ of the story might have been, and peering ahead over an imaginary hump of a climax, trying to sense the unknown crisis moment they simultaneously look forward to and dread.

Garage sales become strange, limbo lands, endless spools of memory, like a storage closet stuffed with old film which may or may not ignite at any moment. Logic tells us, ‘You haven’t worn this jacket since the 11th grade. Something’s been living in one of the pockets. Out it goes.’, but our minds, twisted round stories, vividly recalls the feel of the satin sleeves as we walked through the halls of high school, sweating slightly under the arms as you approached the boy you thought you’d die for who turned out to be worth significantly less than warped Tupperware. How can you let go of the jacket without letting go of part of you?

In the end, moving is a leap of faith – a writer’s worst nightmare. To feel the story working its magic around you, carrying you forward, and being unable to control the ending? Unable to look ahead and give the events about to beset you an editorial review, a stamp of approval? It’s against our very nature. But even then, we understand; we’re at the mercy of the story. And the story says ‘move’; one way or another, the story will move you.