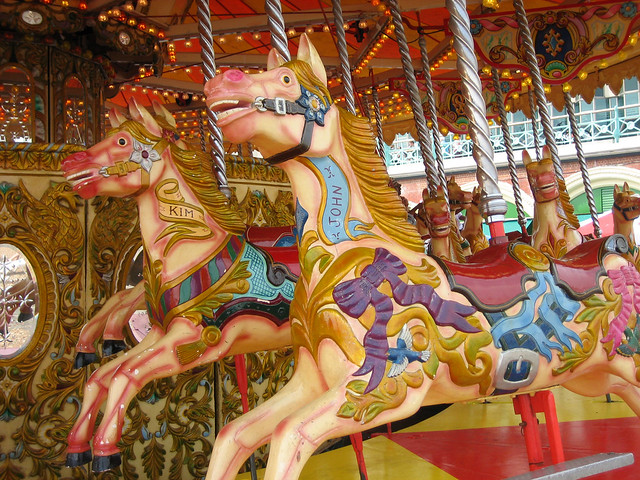 I wrote this piece several years ago, when I was an undergraduate at the University of Washington. At the time, my father had successfully beat back Leukemia and I wrote the below as a sort of ‘near-miss’ emotional exercise. In light of my father’s recent passing, this flash piece takes on new meaning for me.

It cost three whole dollars. But I wanted to go and that’s all that mattered that day. Upon my warrior steed I sat, a heroine of the highest virtue, hair gleaming in the sun as I rode round and round in a victory trot, my father’s hand upon my knee.

I ignored him for the most part, my eyes squinting against the August sun, trying to pick out mother from the faceless crowd of adulthood, hoping she was taking pictures of me in all my glory. Father held me safe in the saddle.

I wished he would let go. My feet were a foot away from the stirrups, but I was a big girl now, he had said so himself. A pretty girl he was so proud of.

I look back at the moment often now. I’m nearly 19 and my father has been dead for a little over two years. I think of how, even then, the cancer was building in his blood. I think of how warm he would get, but claim it was the sun, not a fever. I think of him years later, skin lesions, pallid face under the fluorescent lights, wavy black hair lost to green chemo discs, smiling at me and telling me I’m such a big girl now. He’s so proud of me.

I can still feel his hand on my knee.