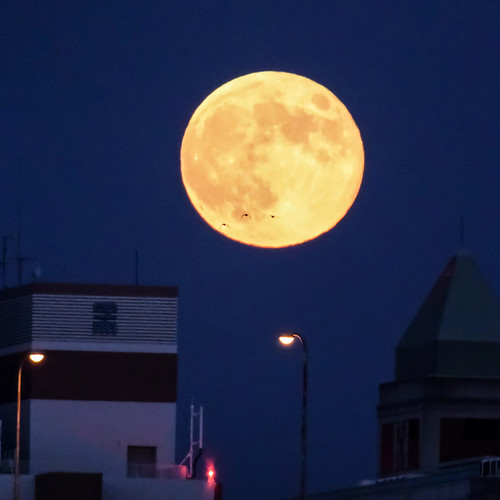 My family volunteered for the moon depopulation program when I was nine. The newspapers compared it to Westward Expansion and a war crime all at once. We were refugees at the same time that we were pioneers.

To me it was just another move. You get used to that sort of thing quick as a military brat. At first it seemed like every time I crossed stateliness, I was on a different planet. But after a while all the suburbs, all the cities, all the landscapes of the Earth look the same. Trees with thick lower branches are still the best for climbing, country roads are always empty at two in the morning, and every house has one squeaky floorboard that you discover only when you’ve broken curfew.

I was thirteen when we left, in the throes of those terrible teenage years. At a time when I wanted nothing more than to be alone, I was packed into a sweaty cargo ship with two hundred other families and pushed away from home for four long days.

It wasn’t until we got there that I realized how much space we really had. There were thirty acres separating each homestead from the next. The houses themselves were extensive, each coming with it’s own web of interconnecting tunnels and a greenhouse for the necessary air. After the shuttle dropped us, mom went inside to start unpacking and Dad went to survey the plot. I stood on the front porch and stared out over the scarred, chalky ground, up into the ink black sky, and observed for the first time the pale, blue dot that had been home.

I felt a pang inside me, a deep stabbing pain that I could not define. I stayed there for a long while as the Earth spun around me, a slave to the pain in my chest, my eyes dry and throbbing, trying hard to blink as little as possible, lest the Earth drop from the heavens while I wasn’t looking.

When the pain subsided in intensity, I stepped down into the regolith covered structure that was now home, frightened to tell anyone about what I had felt. Like a woman hiding a black eye with flaky foundation, I buried myself in my books for days and days, hiding away the pain, filling the loss with other people’s words.

A few weeks later, the pain a distant, but no less potent, memory, I discovered what I thought to be the cause of it. The Hobbit had been left behind. It was my most precious belonging, a tattered, worn thing, its pages so old and ill-used they were practically pulp. My father had bought it for me, from a second-hand bookstore. The store had smelled of cat and damp and the book had always smelled of dust.

How many times I had read The Hobbit I couldn’t be sure, but enough times and with enough love to be able to recite most of it by heart and still find delight whenever Bilbo beat Golem’s riddle game with ‘What’s in my pocket?’

I must have taken it out of my suitcase the night before we left, to fondle it as I slept. I could see it clear in my mind’s eye, the faded emerald-green cover sitting forlornly beside the bench at the embarking station.

I told my mother about it at once. The tears in my eyes moved her to hold me close with her dirt-stained hands as we stood in the greenhouse, but she was wise enough not to lie to me. We couldn’t go back.

It’s ninety-five years since that day and I have never gone back. Many others have stopped on this moon and looked back at the bauble that was home. They have gone much farther than me. The depopulation program was, of course, an unparalleled success, so much so that there’s not a soul left on the Earth today.

The house has become mine, my parents having passed away some twenty years ago; I’ve never wanted another. I still come out on the porch and look up at the Earth, only now it looks like an abandoned house, with its windows busted in with stones, its door gaping, like a toothless mouth. The place that had once been the ultimate definition of home is empty of people and empty of me.

I’ve gotten a new edition of The Hobbit. It sits on my bedside table, tattered and worn, just like it’s predecessor and yet, very much nothing like the one that came before. I’m glad that I left the old totem behind. For in time, I would have found that it was not the same book; because I was not the person who left the earth all those years ago.

One thought on “Moon”